This is where people who got involved tell their stories of time spent on LHS – enjoy! 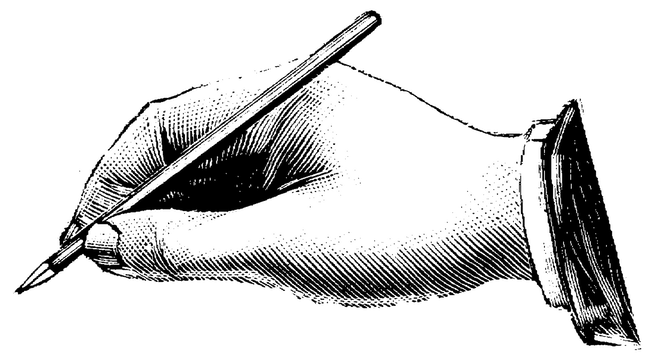 The simultaneous gasps of awe left us in no doubt that we had arrived somewhere special. As we crested the saddle between steep serrated mountain faces and rolling snow-covered alpine tussock, we encountered a scene so striking that it almost overwhelmed the senses. This was genuine wild beauty.


Our group had been invited by Lake Hawea Station to support nascent efforts toward ecological restoration and regenerative farming. As undergraduate environmental science students participating in the Wildands Studies New Zealand program, we had been gifted an unparalleled opportunity to experientially learn and meaningfully engage with fieldwork in support of biodiversity conservation 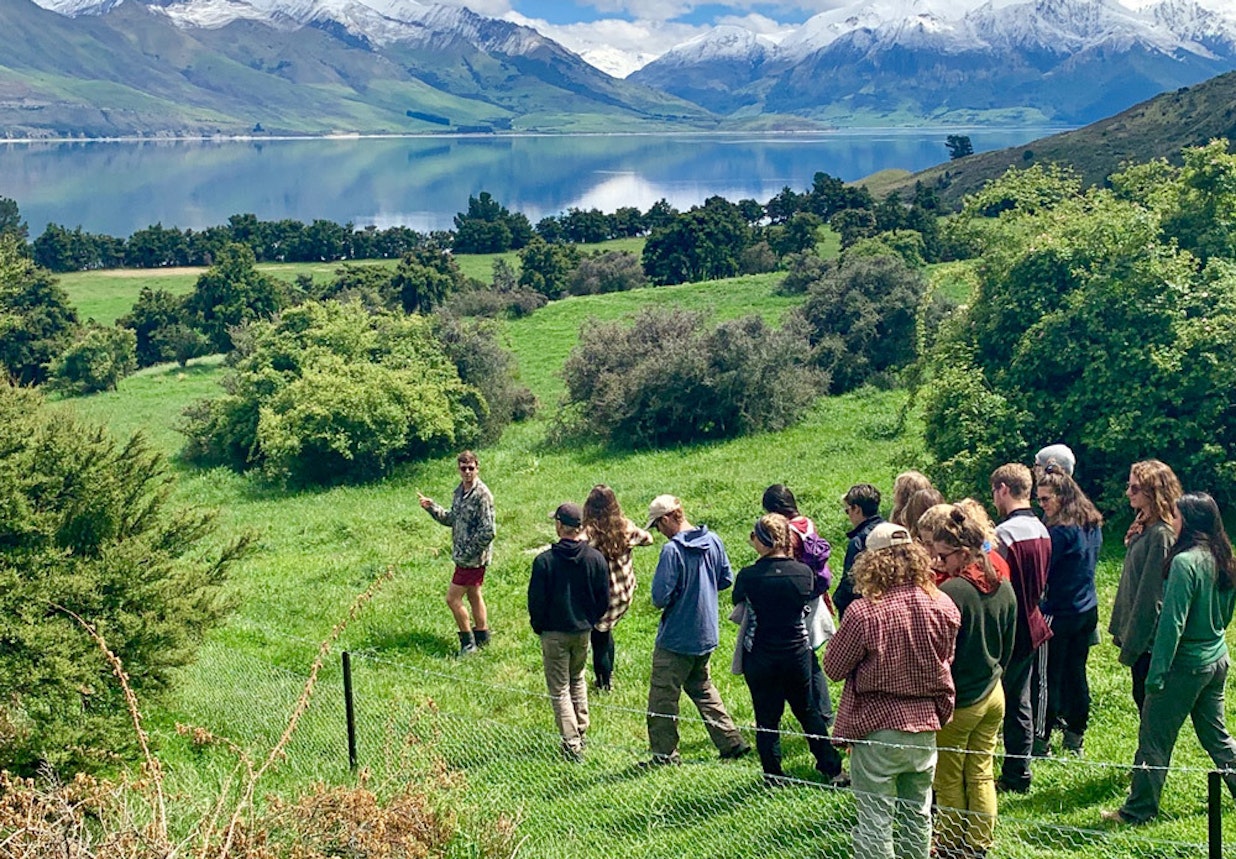 We were tasked with performing a series of baseline ecological monitoring surveys to track the planned restoration efforts of Lake Hawea Station over the coming years. Dividing into two groups, we surveyed frontcountry (mostly riparian) and backcountry (mostly alpine) areas, carrying out a series of vegetation transects and point counts for other species of interests.

For the backcountry team, one of the most memorable moments occurred as we came to the end of their last survey plot on the first evening. As the sun crept behind the tussock hills, and the Grey Warblers pushed out their final trills for the evening, the snow was ready-in-wait to capture the rising moon’s luminous glow across a breathtaking landscape. Before long, pastels of pink, purple, blue and orange were morphing into a diamond- studded sky and the group felt a wave of tranquillity wash over the landscape.

The sky captivated my attention that night”, said student Sage Pollack. “In that moment, everything around me seemed in place. Everything, whether beautiful or ordinary, seemed imperfectly perfect. Everything memorable in that moment I now owe to this wild place.”

The following day of surveying delivered many more impressions for the group. Weaving their way across tussock grasslands, rocky outcrops and screes, a preliminary population count of reptiles uncovered 13 geckos and skinks over the two days. “The envisioned management of introduced species and recovering high country areas will further support key habitats for these species”, observed student Ellen Murphy. 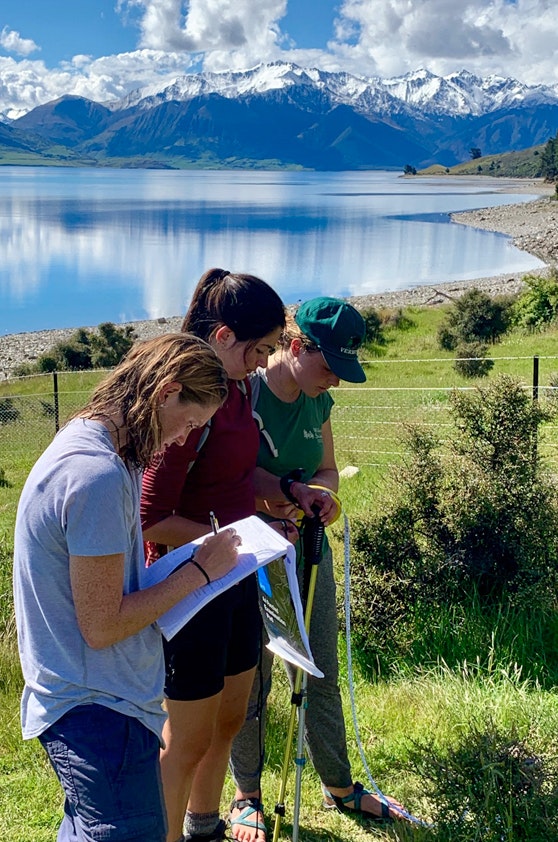 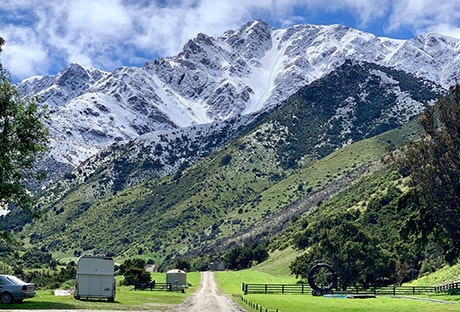 Meanwhile in the frontcountry, a successful baseline riparian monitoring survey has now paved the way for planned restoration planting of native tree species. It is envisaged that future postplanting surveys will find improved vegetation and bird diversity, and water quality though reduced soil erosion and agricultural run-off into the turquoise Lake Hawea.

The front country team had their work cut out as they crawled through entangled thickets of native Coprosma spp. and Matagouri spp. yet at one point they suddenly found themselves under the branches of the rare Tree Daisy (Olearia fimbriata).

“At first it almost felt anticlimactic”, said student Michael Breuer. “We expected this species to be rare and tough to find but here on Lake Hawea Station we found a seemingly thriving population standing like watchers over their surrounding neighbours.” As the team made their way up the valley, they noticed the trees standing out all the way up the valley until the scrub met imposing beech forest. Michael added, “Seeing them spread like this was quite deceiving considering the limited extent of their distribution in the country.”

In search of the once prevalent beech forest, some members of the team hiked up steep ravines criss-crossing fast-flowing streams in an attempt to visually assess the current status of beech forest in the area. They encountered evidence of former widespread burning practices. Student Elliot Grant observed, “At first, I was taken back by the charred 30 metre tree trunks – visible scars from the past. But amidst the death, there was life waiting to thrive again - 2 to 3 metre tall beeches were springing up around their elders.” It was clear that regeneration is the natural impetus of life, if given the chance - and some helping hands.

Between and beneath these ecological insights, was perhaps something just as important: the vision of the Ross’ family. Led by the father-son team of Geoff and Finn Ross, their collaboration brings contrasting yet complementary perspectives united by a commitment toward a regenerative future in service of biodiversity conservation. Beyond their shared knowledge and dedication to improving land management, what was particularly striking was their humility and willingness to engage with a range of stakeholders, such as ourselves

Both Geoff and Finn appear deeply connected to the New Zealand landscape. It was evident that stewarding this stunning stretch of land was a natural byproduct of their close relationship with wilderness. But beyond that, one felt an underlying commitment to “pay it forward” - not only for nature itself, but for the greater benefit of all New Zealanders and as a model for other visitors from far and wide. Student Rebecca Rashkoff summed it up: “As a student and aspiring environmentalist, I came away from my time at Lake Hawea Station feeling truly inspired by Finn and Geoff’s determination to create a new and unified story for conservation and agriculture in New Zealand.” 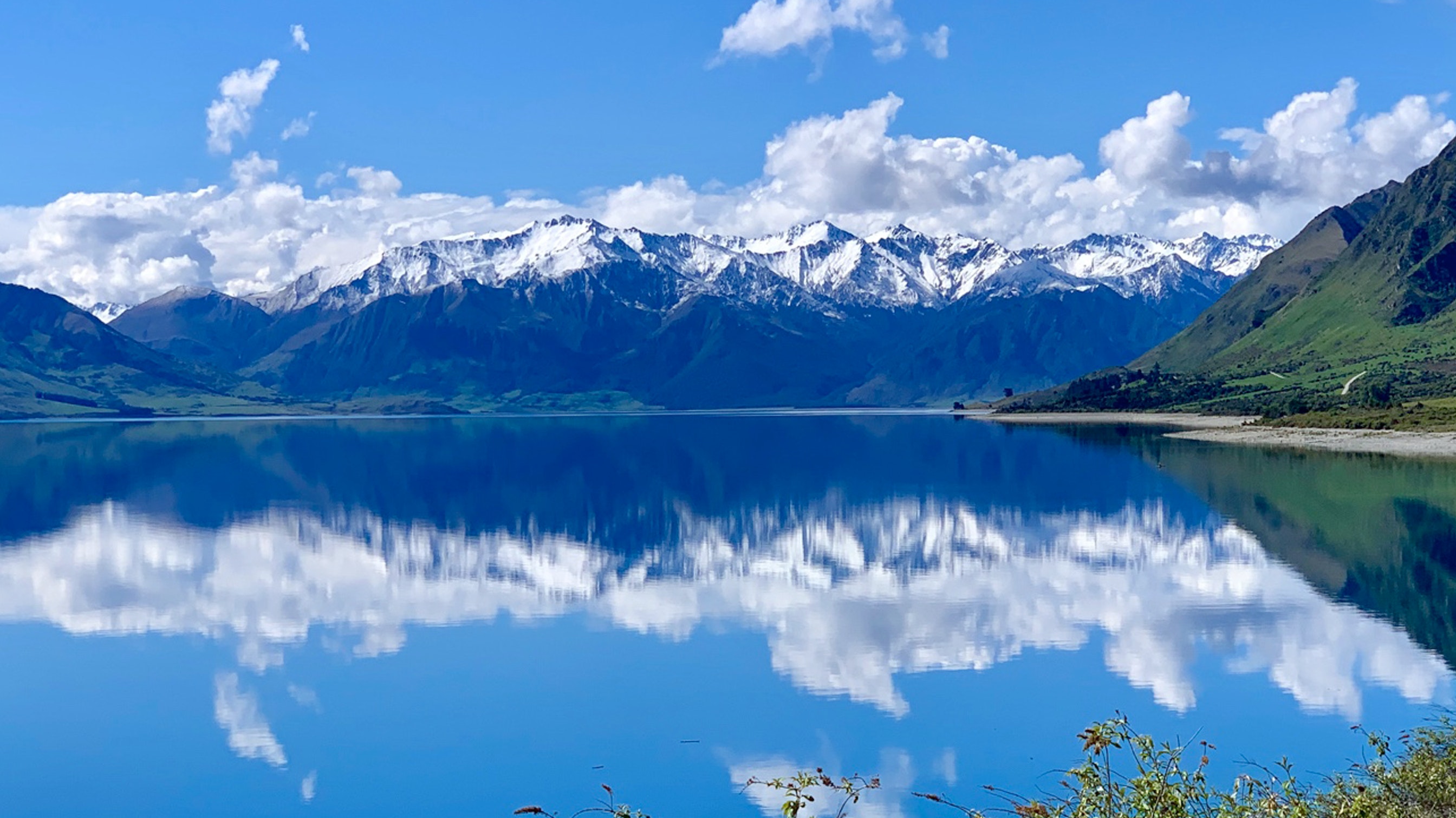